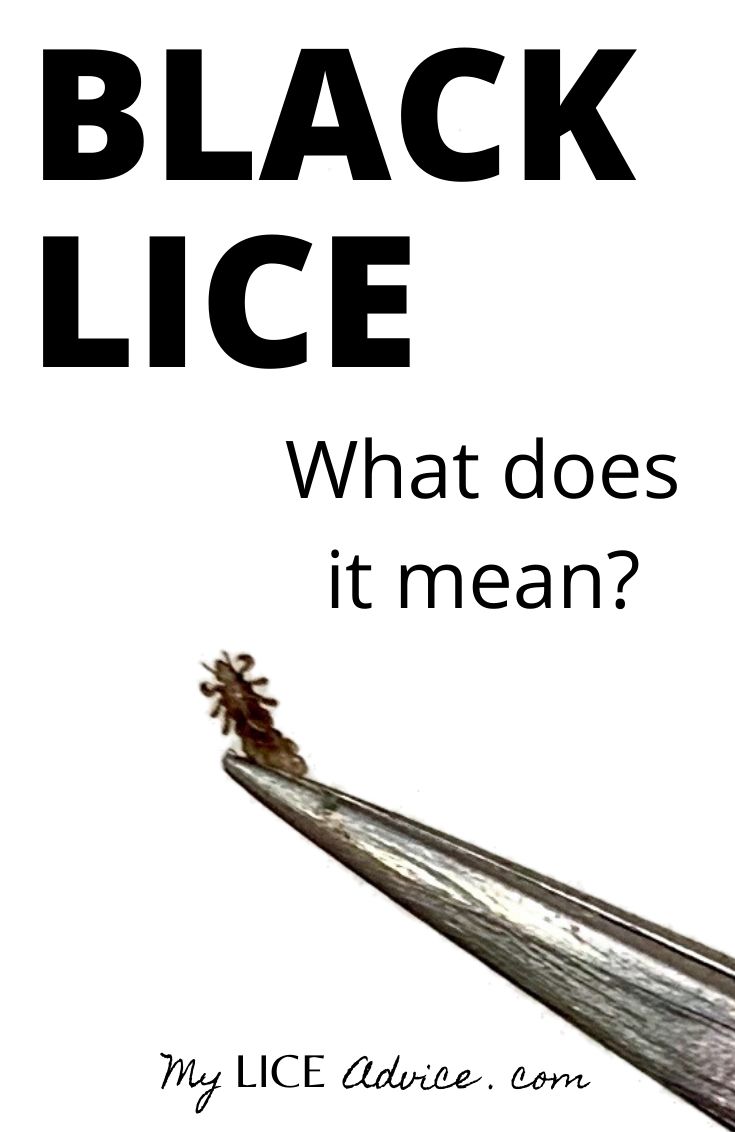 If you’ve found black bugs in your child’s hair or you are having difficulty finding lice in black hair, you are not alone. Can lice be black?

If you are looking for an article specific to lice and African-American or Black hair, then you can find a better article here, packed with pictures of lice and lice eggs in Black hair. 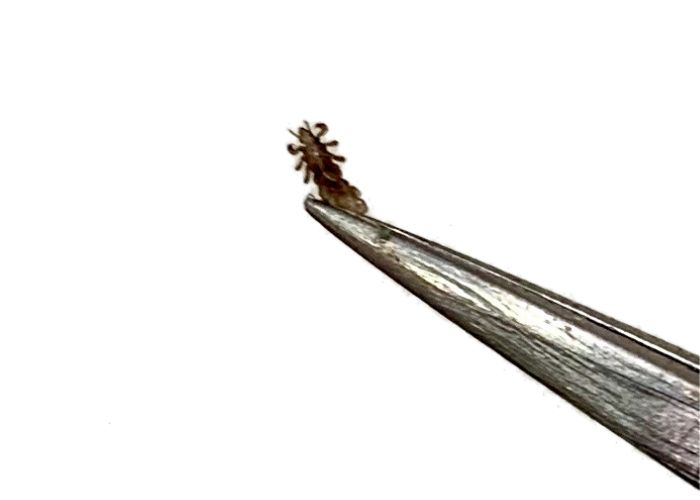 Lice are tiny insects that live on humans and other species. Human lice require a human host as they need to feed on human blood frequently. They range in size from being almost invisible at birth to about the size of a sesame seed as adults. Three types of lice live on humans: head lice, body lice, and pubic lice.

Body lice are the least common type of lice in the United States and other developed countries. They are associated with poor hygiene and are usually only seen among those living in crowded living situations with limited access to bathing facilities like homeless and refugee camps. If you are someone who bathes regularly, it would be extremely rare for you to have body lice. They live primarily on the clothing and bedding of individuals and only come to the skin when feeding.

Body lice CAN transmit diseases such as epidemic typhus, trench fever, and other bacterial infections.

Pubic lice, also known as “crabs,” live in course hair, usually pubic hair. However, pubic lice can make their way into eyebrows, beards, and chest hair. They can rarely infest eyelashes. Pubic lice is an STD and are usually only passed during intercourse.

Head lice are by far the most common type of lice. They are a widespread problem in the United States, where around 12 million kids get head lice every year!

Head lice stick solely to the hair of the head and near the head. You can occasionally find lice in facial hair, but only in severe cases. Head lice are NOT associated with poor hygiene.

Head lice are not dangerous and do not spread diseases, but they often make the person they are infesting uncomfortable.

If, after seeing multiple pictures of lice in this article, you aren’t convinced that the black bugs in your child’s hair are lice, then skip to the Do Other Black Bugs Live in Hair That Are Not Lice? section of this article.

Can Lice Be Black?

Although most websites claim that head lice are tan or white, head lice change color based on the hair and skin type of the person they are infesting. Head lice are masters of disguise. They are incredibly adaptable and mutate to best survive, including changing their appearance to adapt. Black lice are most commonly found in a person with black hair and darker skin, whereas you will find lighter-tan lice in those with fair hair and skin. 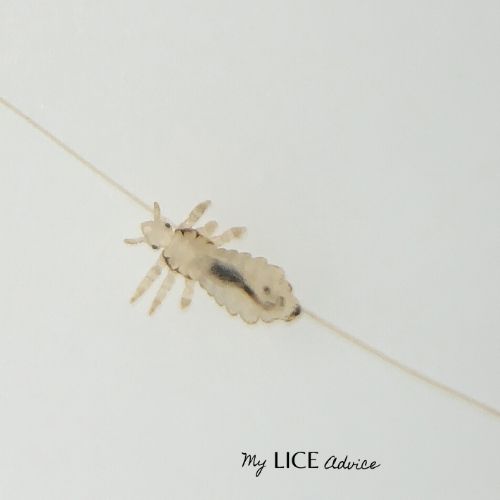 When head lice are first born, they are translucent, almost entirely see-through. The only part that can be spotted easily is their black intestine-looking stomach down the middle of them. At this stage, it is nearly impossible to see head lice. Even if you have fantastic vision, the only thing you’ll see at this transparent stage is a little black dot, which is the stomach of the lice bug.

Head lice on people with blonde hair continue to have a lighter color. Lice at its darkest in blonde hair are usually tan to light brown. The tan color helps them to blend in well with light-colored hair.

But for those with darker hair, lice become darker over time. For a person with black hair, adult head lice usually change dark grey to almost entirely black.

Lice are always darker after they have fed. What do they eat? Lice exclusively feed on human blood. Immediately after lice feed, their black stomach becomes larger, and their body becomes darker. Many head lice have a red hue to them shortly after feeding (see picture). 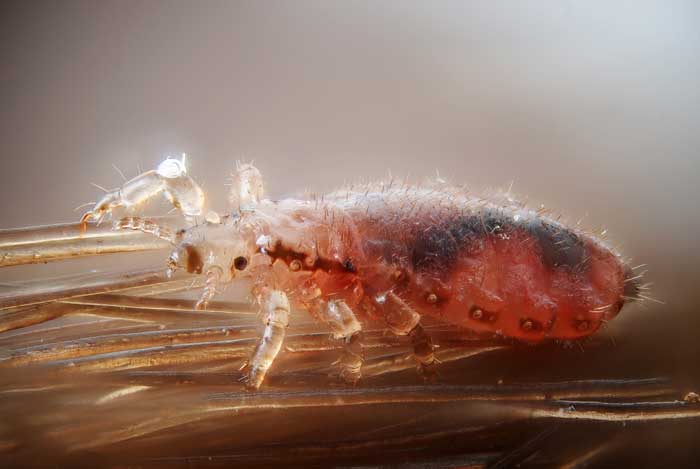 Regardless of what color lice are while living, they all turn dark brown to black after they die and begin to decay. 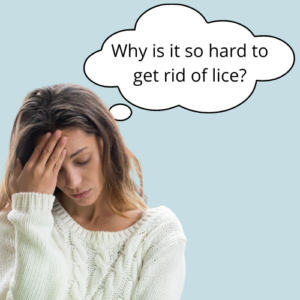 Why Is It So Hard to Get Rid of Lice?

Lice have become immune to everything that used to work in the past. Perhaps you remember your mom using a typical lice treatment or mayonnaise and that doing the trick. The new strain of head lice is no longer killed by those treatments, that’s why lice today are termed by people, “super lice,” because they are immune to those treatments.

I’ve cured thousands of people of lice in my lice center and let me tell you, I don't do it with over-the-counter lice treatments.

Most people struggle with lice because they focus all of their attention on killing lice bugs and not enough attention on GETTING RID OF LICE!

If you want to get rid of lice you have to address all 3 of the problems of lice:

The best way to get rid of lice is to tackle all 3 of these problems at the same time, which is what I teach in Get Rid of Lice Like A Pro. 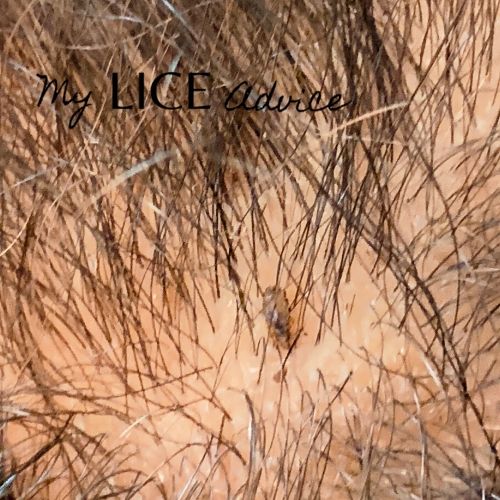 If you are African American or have afro-textured hair, be sure to check out the article Black People Get Lice Too: Pictures and Treatment Tutorial that shows detailed pictures and has a tailored treatment plan for denser hair.

Head lice range from almost invisible at birth to the size of a sesame seed when fully grown. They range in color from tanish grey to brown and are slightly translucent, but in black hair expect to find black, dark grey, or dark brown adult lice. The defining characteristics of head lice are:

If, after seeing lots of lice pictures, you are convinced that the black bugs you are finding are not head lice, then skip to the Do Other Black Bugs Live in Hair That Are Not Lice? Section of this article. 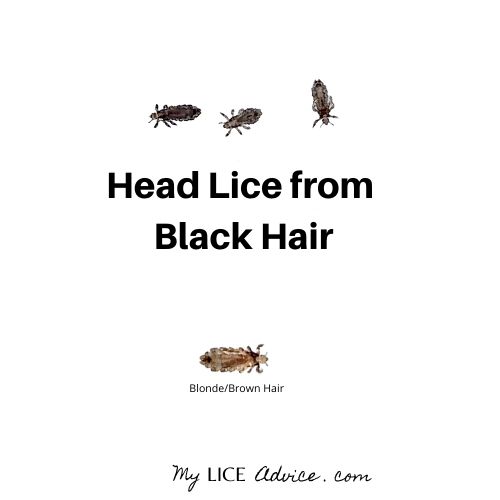 When you remove lice from the head and put them on a white backdrop, it is readily apparent which lice came from what color of hair. Look at this comparative picture of head lice from black hair, blond hair, and brown hair. 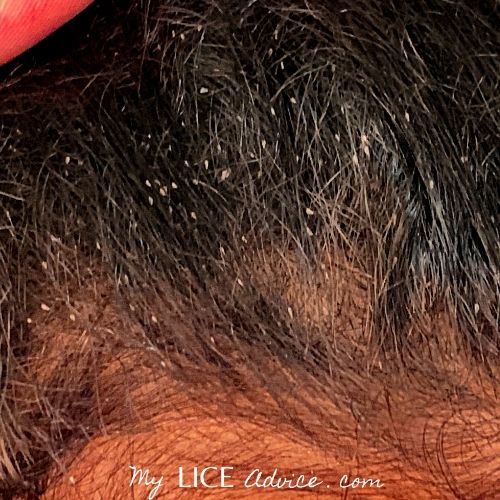 Because lice are so good at hiding and moving quickly, it is pretty rare to see lice bugs early on in an infestation. Instead of looking for fully grown lice bugs, you should focus on finding lice eggs (also called “nits”) in the hair.

Unlike adult lice bugs, nits do not move around or hide. These eggs are glued onto the hair strand so they will not fall off. Because nits in your child’s hair are the first sign of a lice infestation, finding them at this stage can help you eliminate lice when there are only a few adult lice bugs. 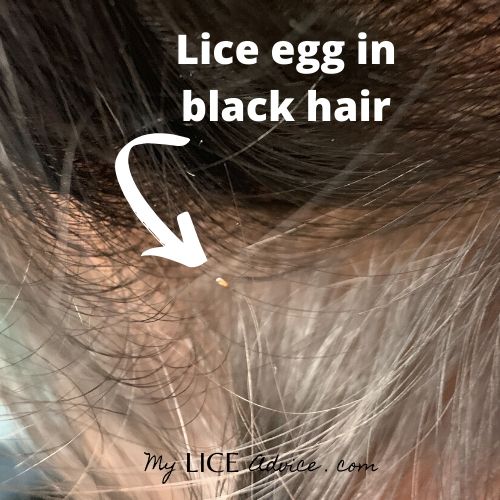 Lice lay 6-10 of these nits in the hair every day, and they add up quickly. Nits are often mistaken for dandruff or dirt in the hair because they are small, and their shiny appearance can make them look white. In black hair, most lice eggs will look white and shiny or light brown.

How Do I Check for Lice In Black Hair? 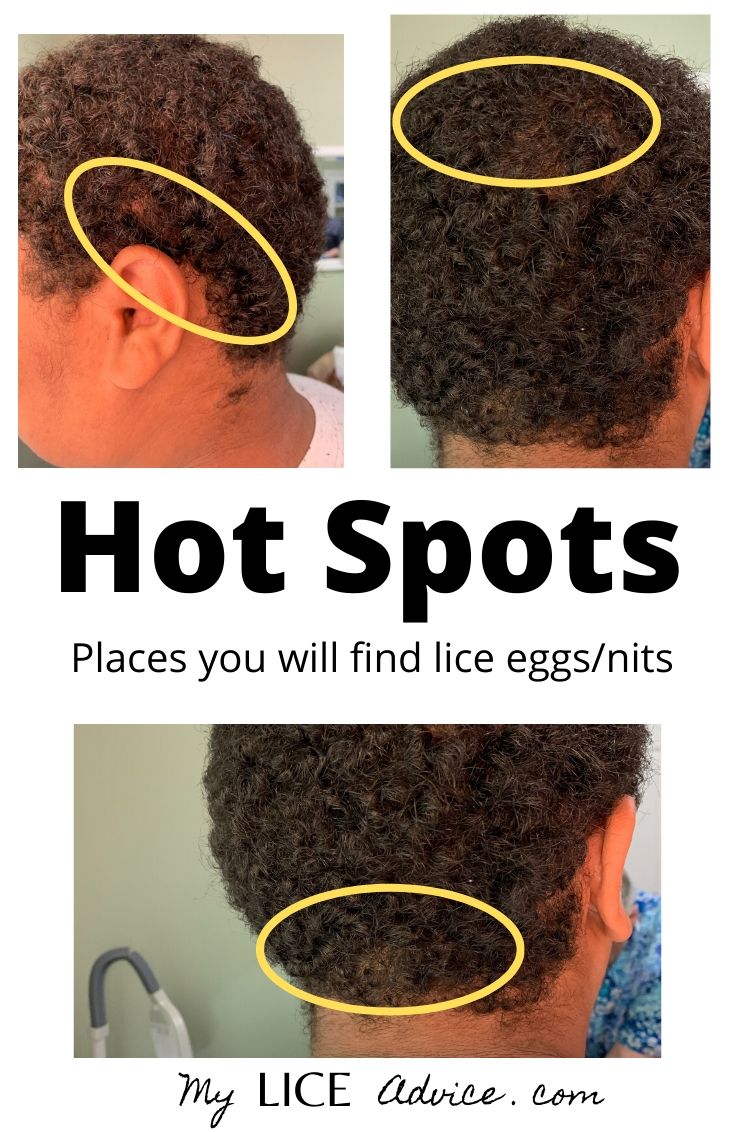 The best places to look for lice eggs are in the “hot spots” of the head: behind the ears, the nape of the neck and the crown of the head.

Checking for lice eggs in the “hot spots” of the head, section by section, is the best way to determine whether someone has lice in the early stages. Here’s a link to a full tutorial on how to check for head lice. This tutorial features a blonde child, but the principles for checking for lice are the same.

Do you want to KILL LICE or GET RID OF LICE???

When you have lice you have 2 problems, lice bugs, and lice eggs. Often people focus all of their attention on lice bugs, but neglect the much bigger problem- LICE EGGS! Those eggs are full of little lice bugs, just waiting to hatch and start this whole lice cycle all over again! That’s why you keep getting lice back!

The best way to get rid of lice is to tackle both of these problems at once, which is what I teach in Get Rid of Lice Like A Pro.

What's the FASTEST Way To Get Rid of Lice?

When I treat lice in my lice center I don't use any toxic chemicals or special treatments. In fact, you can do a professional lice treatment at home without buying any lice products. I teach parents how to do this professional technique on their children at home, on my page Get Rid of Lice Like A Pro!

In Get Rid of Lice Like A Pro! you learn how to get rid of lice in less than a day by doing what the pro's do. And it's gone permanently- there are no re-treatments, and no messing around with lice kits. You do the professional  technique on your child at home, you kill all of the lice and the lice eggs in one session and then you're done with lice.

That's the FASTEST and MOST EFFECTIVE way to get rid of lice. You can learn how to do it by clicking here.

Do Other Black Bugs Live in Hair That Are Not Lice? 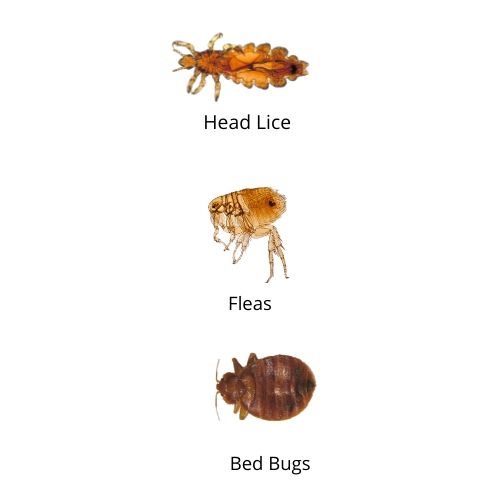 If you have pets, then there is a chance that you can find fleas in your child’s hair. It's not typical that a child would have a “flea infestation” because fleas do not prefer humans. But, I have found fleas in several children over the years. I end up treating those children with fleas in the same way as I treat head lice- with a super lice treatment.

You can tell the difference between fleas and lice because fleas have hind legs that jump, whereas head lice do not jump and do not have hind legs. Head lice’s legs are all on the upper half of their bodies.

One other type of bug that could be in a child’s hair is bed bugs, although bed bugs do not infest hair. Bed bugs typically live the bed, and in furniture near the bed. They usually only come out to feed at night on the skin, not in the hair.

You can tell the difference between head lice and bed bugs because bed bugs are very flat with a shield-shaped body.

If you are finding black bugs in your child’s hair, you are almost certainly dealing with head lice. Although many internet sources without a lot of hands-on knowledge will say lice are tan or white, lice can be a variety of colors. Lice typically blend in with the skin and hair color of those that they are infesting.

Regardless of what color of lice you are finding in your child’s hair, you are likely dealing with super lice. Super lice are incredibly resistant to the old treatments we used 30 years ago. The fastest and most effective way to get rid of lice is doing a professional lice treatment at home, which is what you can learn how to do on the How to Get Rid of Lice Like A Pro page. 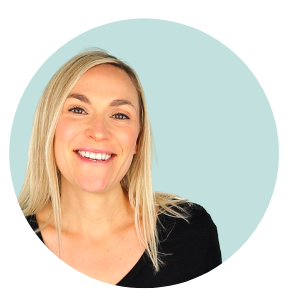 Theresa is a lice expert with years of experience curing children of lice. She currently works with government agencies and non-profit organizations to help children with the most severe head lice infestations in the US.

Originally trained as a Registered Nurse, she changed specialties to study lice. Later, she opened a lice treatment center where she perfected the PRO technique she teaches in the Get Rid of Lice Like A Pro online course. She now works helping those struggling with lice around the world.

She is the creator of MyLiceAdvice.com, one of the top lice informational websites in the world and she teaches parents around the world how to get rid of lice in less than a day in the Get Rid of Lice Like a Pro online course. 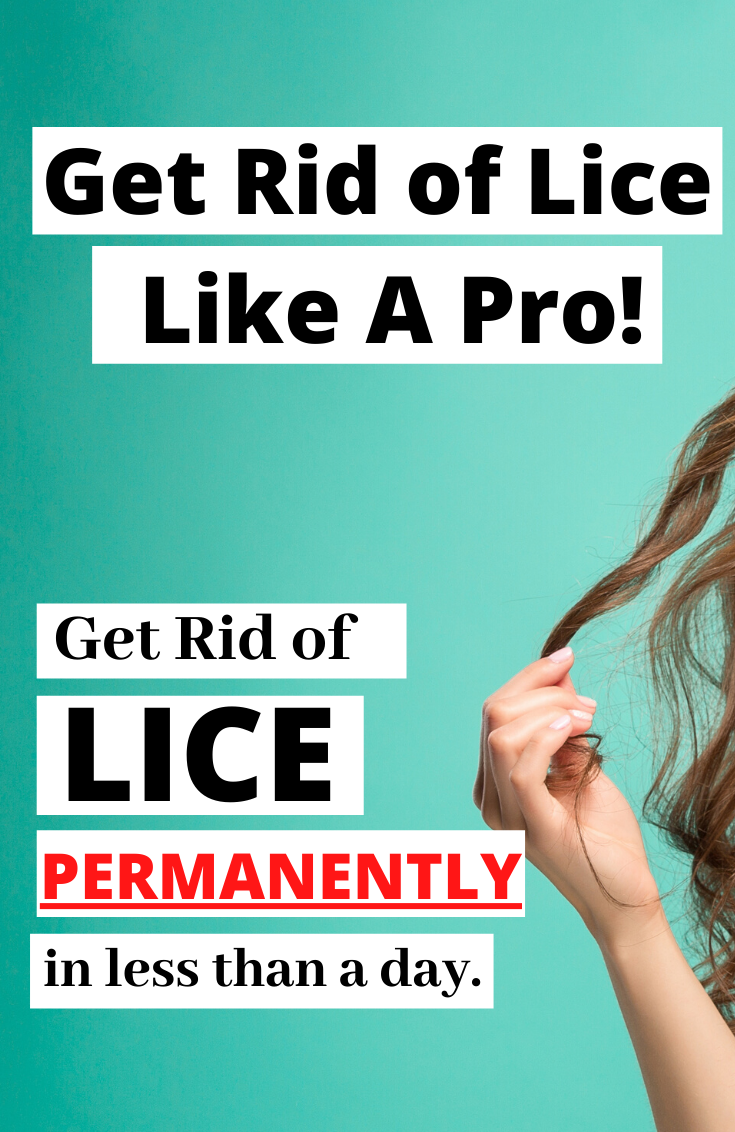 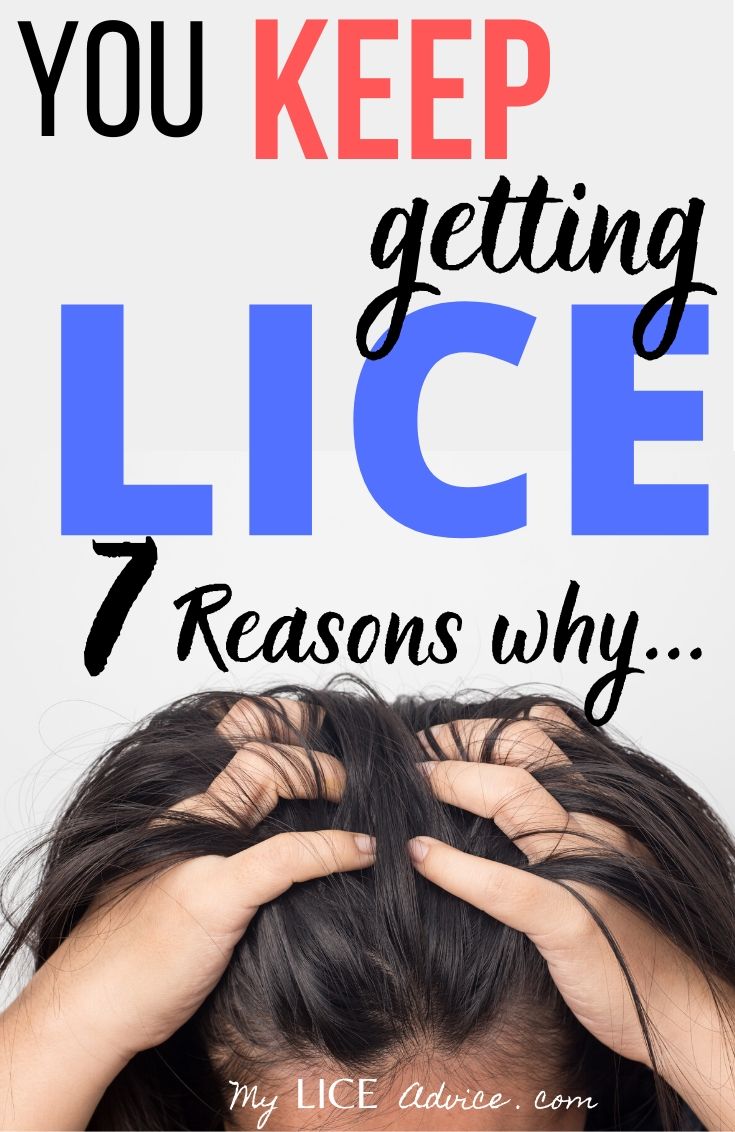 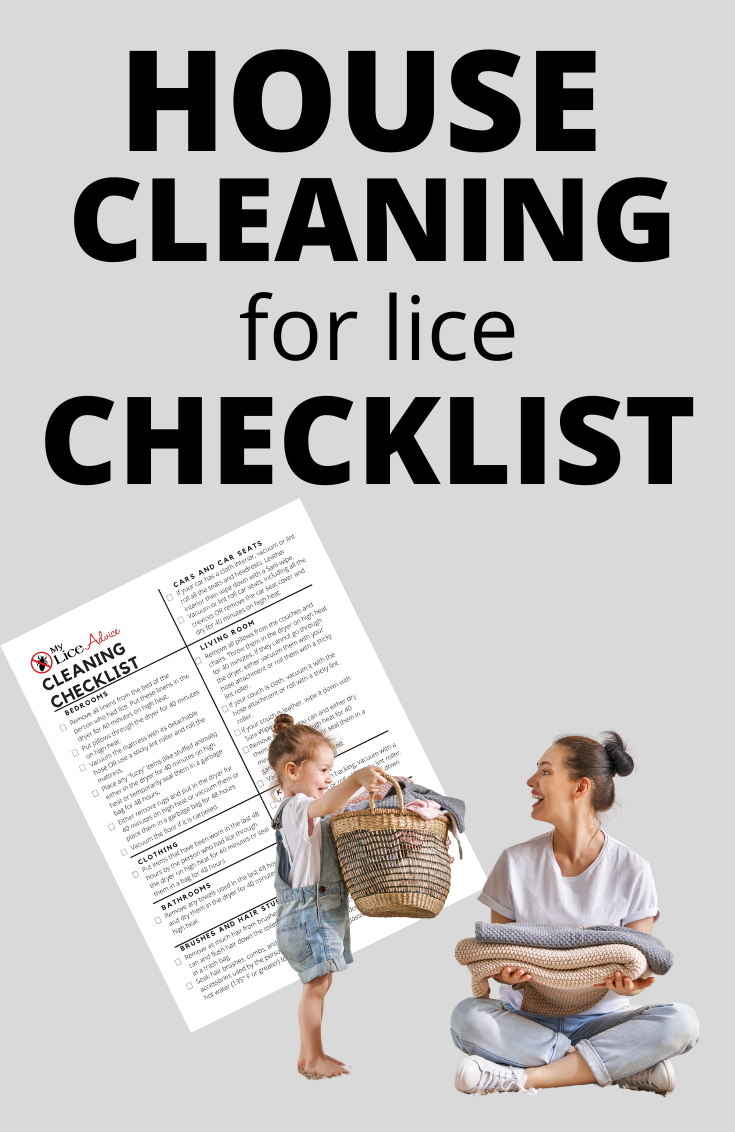 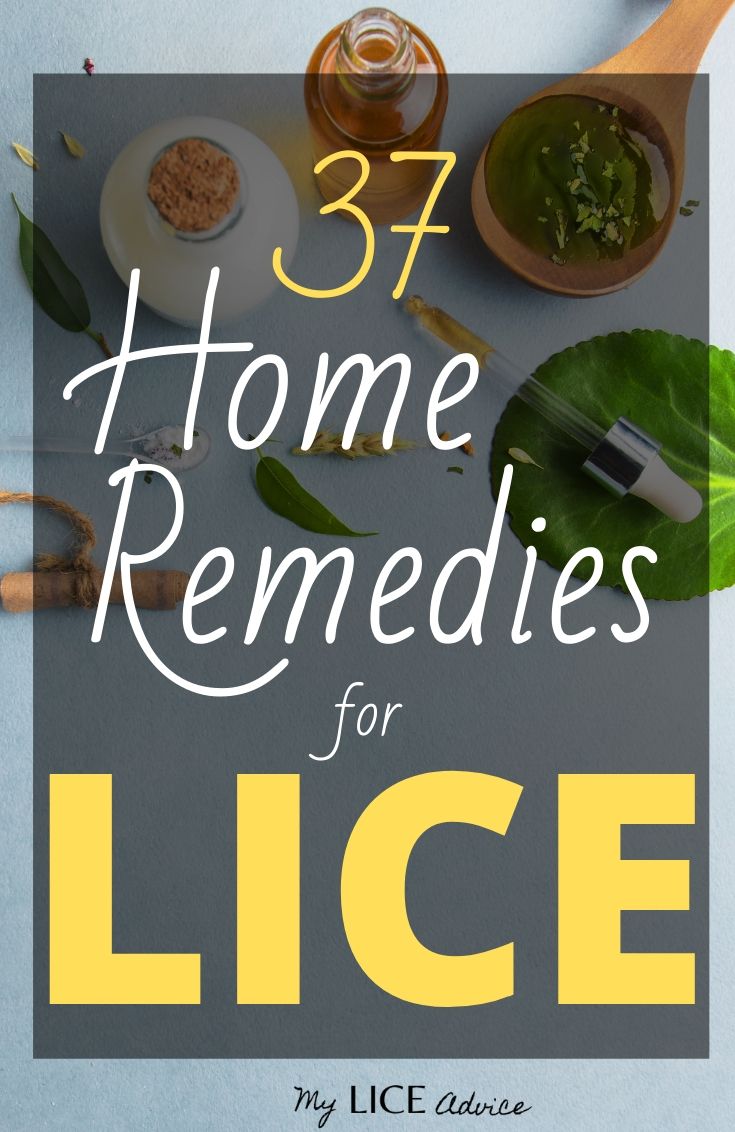